About the African Responsible Tourism Awards

Founded in 2015, the African Responsible Tourism Awards are a continent-wide search and celebration of Africa’s most inspiring and enduring responsible tourism experiences. Their vision for the Awards, which is open to any organisation anywhere in Africa, is to shine a light on the best of the best, and to inspire change in the African tourism industry. The winners of our Awards are announced each year at a ceremony at World Travel Market Africa held in Cape Town.

What are our Awards for?

Better Tourism Africa wants to help people live their dreams through authentic and life-enriching adventures, to ensure local people and wildlife benefits and to be a catalyst for change in the tourism industry. The Awards are a key part of this dream to inspire positive change.

The Awards rest on a simple principle that all types of tourism, from niche to mainstream, can and should be organised in a way that preserves, respects and benefits destinations and local people. They celebrate the shining stars of responsible tourism, the individuals, organisations and destinations working innovatively with local cultures, communities and biodiversity.

But more than that they want their examples to inspire others. That’s why they’ve got the most rigorous judging process around and work with the best partners in the industry to help get the word out to ensure that their stories provide an example to the industry.

What does it mean to be a winner?

Finalists of the Awards are invited to a prestigious ceremony hosted as part of World Travel Market Africa in Cape Town where the winners are announced to an audience of tourism ministers, destination managers, industry professionals and media. 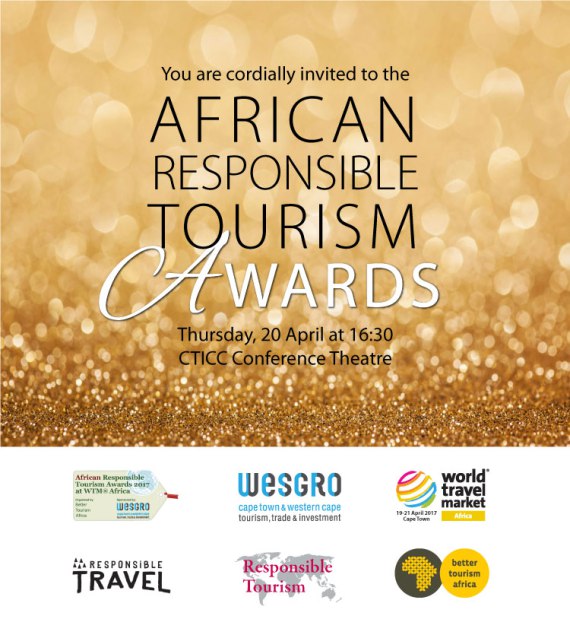 I’m honoured to be invited by Heidi van der Walt, who’s part of the organising committee to host the 2017 African Responsible Tourism Awards ceremony on 20 April, at WTM Africa 2017.

‘As a conscious traveller with a deep love for Africa, its people and the environment, as well as a self-proclaimed earth advocate, it is a great privilege to be associated with the African Responsible Tourism Awards that annually honour the individuals, establishments and places offering top tourism experiences that are built on a passion for the environment, our wildlife and local communities. Each of the nominees brings invaluable lessons in using tourism to create better places and I cannot wait to learn from them’.

Diarise 20 April 2017, 16.30, and join us and headline sponsor Wesgro in celebrating Africa’s responsible tourism leaders.  Follow #ARTA17 on Facebook and Twitter for the latest news on sponsors and finalists.

error: Do understand that my content is protected, should you wish to use my words or pics, kindly email me at dawn@theincidentaltourist.com. Thank you.